Using an iPad in a Grade One Classroom

Since November I've had the privledge of teaching with an iPad in my grade one class. Along the way I have discovered a lot of great ways to use it to help my students have their individual learning needs met.  Having just one iPad did bring about its own set of challenges but we were very lucky to have access to some additional iPads in the final term of school.  Next year we will have  iPads again thanks in part to my participation in my school's successful innovative learning grant application and another special project I'm involved with at the school district level.  Needless to say my head has been spinning all summer with ways I can integrate this technology into my classroom with out losing sight of the important non technology based teaching and learning my students need too. 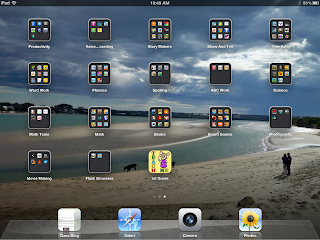 So before I start the next school year I think it's important for me to review some of the apps we used this year and how we used them. To begin with here is a screen shot of my student's page on my iPad.  You'll notice that I have their apps neatly organized into folders which I find really helps when we are looking for a specific app or they are trying to decide on a specific type of app to use. Their folders include productivity, voice recording, story makers, show and tell, fine art, word work, phonics, spelling, abc work, science, math tools, math, books, board games, photography, movie making, and flash browsers. I have the Teach Me 1st grade app too but to perfectly honest we've barely used it. 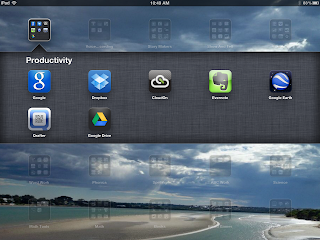 This folder is a little more for me than for my students. At present it contains the Google, Dropbox, CloudOn, Evernote, Google Earth, Qrafter, and Google Drive apps.  While my students use Qrafter to scan into our class blog, and I'd like us to use Google Earth more to discover the places we are connecting with, the reality is most of the apps are in there for when I need to save or access their work. 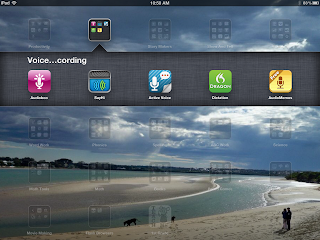 My voice recording folder contains the following apps: Audio boo, Say Hi, Active Voice, Dictation, and Audio Memos.  It used to also contained Talking Tom but for some reason it has been removed. Our most frequently used app here is AudioBoo.  We have used it to record reading.  Say Hi is a new app and it's great for my limited English speakers. If the app has their language on it then it will translate their first language (say Korean) into English - both in text and in sound.  Since I work in a high ELL school this app has been a lot of fun to use.  Dragon Dictation and Active Voice are two different speech to text apps which with our newly installed wireless work a lot better. I like to use those apps with my students that struggle with written output but have so much to say. Here is a sample of us using AudioBoo. 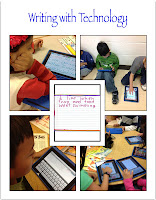 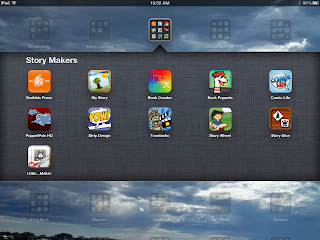 These apps were quite popular with my students and different students preferred to use different apps depending on the job required.  Having only one iPad most of the year did bring about its own set of challenges though as only one (or two) student(s) could create with it at a time. With an increase of iPads this became less of a problem. The apps that you can find in this folder include Scribble Press, My Story, Book Creator, Sock Puppets, Comic Life, Puppet Pals, Strip Design, Toontastic, Story Wheel, Story Dice, and Little Book Maker.  Here are some examples of my class using Sock Puppet,  Scribble Press and Puppet Pals. 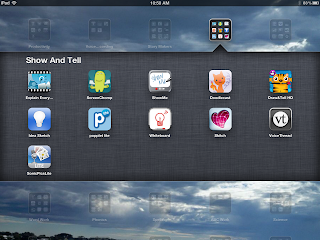 These apps are probably my most favourite because they allow my students to demonstrate their learning through pictures, and/or words. They are very open ended and can be used across a variety of content areas. For the most part they are great for any student k - 7. This folder contains Explain Everything, Screen Chomp, Show Me, DoodleCast, Draw and Tell, Idea Sketch, Popplet Lite, White Board (allows you to work on two iPads collaboratively), Skitch, Voice Thread, and Sonic Pics Lite.

Here are some samples of us using Screen Chomp, Show Me, Draw and Tell, Skitch, and Voice Thread. 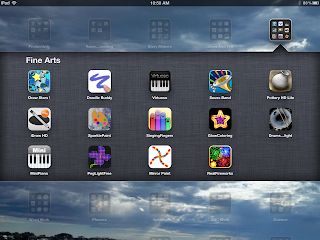 This folder contains the following apps: Draw Stars, Doodle Buddy, Virtuoso, Suess Band, Pottery HD Lite, iDraw HD, Sparkle Paint, Singing Fingers, Glow Colouring, Drums Light, Mini Piano, Peg Free Light, Mirror Paint, Read Fireworks.  These apps have been used to help my students practice their word wall words or for just plain creative purposes.  While I have taken photos of my students using these apps I only have one blog post that mentions one of them.  Here is a sample of Pottery HD Lite. 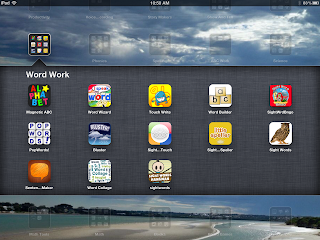 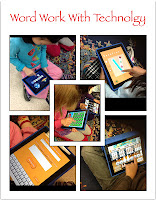 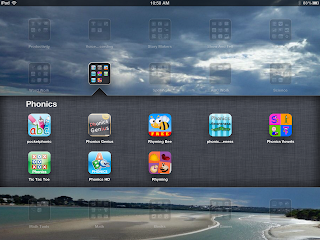 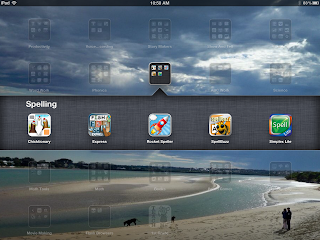 I found later in the year my students loved to use the spelling apps during their word work time.  This folders contains Chicktionary,  Express, Rocket Speller, SpellBuzz, and Simplex Spell Lite. 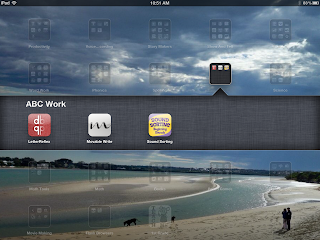 My ABC work folder contains three apps LetterReflex, Movable Write, and Sound Sorting. I have several other go to ABC apps but they are not on my iPad at this time.  Sound sorting was particularly great for my new to Canada, never been to school before students.  The LetterReflex app is fantastic for those students with letter and number reversals. Here is a blog about my class using Letter ReFlex. 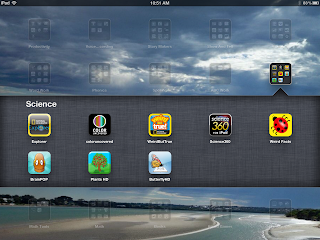 The science folder contains the following apps National Geographic Explorer, Colour Uncovered, National Geographic Weird But True, Science 360, Weird Facts, BrainPop, Plants HD, and ButterflyHD. Specific apps, such as Plant HD were used we were studying plants.  Many of the "reading" apps were used during "free read" time in my class. 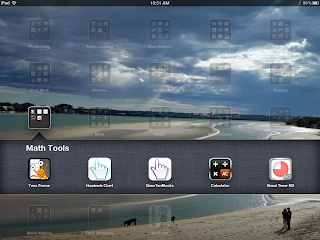 The math tool folder contains the following apps Ten Frame, Hundreds Chart, Base Ten Blocks, Calculator, and Visual Timer HD.   I must admit that they weren't used too often for most of the year because with only one iPad there are a lot better tools to use than the digital ones. However when we had access to more we utilized the digital tens frame a lot.  I also know when we look at numbers and skip counting the 100s chart tool will come in a handy.  Here is a post about us using the Tens Frame app. 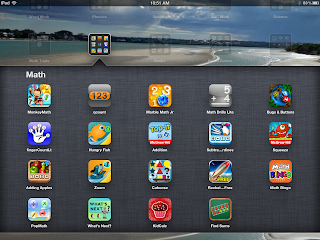 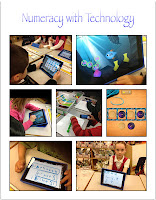 This folder is filled with a variety of different math practice concepts. I have tried to chose apps that are not strictly drill and practice apps.  I also find we do a lot more hands on math but I do have students that love to practice math facts on iPads.  This folder contains the following apps Monkey Math, QCount, Marble Math Jr, Math Drills Lite, Bugs and Button, FingerCountLite, Hungry Fish, Top It Addition, Subtraction Sardines, Squeeze, Adding Apples, Zoom, Caboose, Rocket Math, Math Bingo, PopMath, What's Next, KidCalc, and Find Sums. 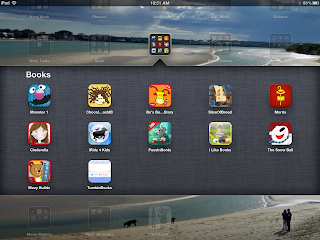 To be perfectly honest as much as my students love interactive books, they are just as excited to read traditional paper books.  I have several iPad books not available on this iPad at this time as I find I tend to add and subtract books as needed. For example during our Fairy Tale study the iPad was filled with Fairy Tales.  At present my books folder contains Monster 1, Chocolate Attack, Bo's Bedtime Story, Slice of Bread, Morris, Cinderella, iRidz 4 Kids, Puss in Boots, I Like Books, The Snow Ball, Bizzy Builds, and a direct link to Tumble Books. 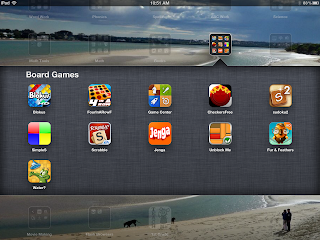 When my students have free choice time they are free to chose what ever they would like to do. I like to keep this folder filled with games for them to use if they'd like. Right now this folder contains Blokus, Four in a Row, Game Centre, Checkers, Sudoku2, SimpleS, Scrabble, Jenga, Unblock Me, Fur and Feathers, and Water?. 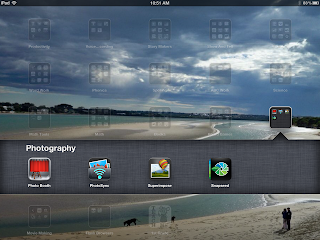 My class didn't use these photography apps all that much as they relied heavily on the camera feature of the iPad.  I most definitely can see us using the Photo Booth app as we study feelings and emotions.  I tend to use the PhotoSync app as a way to get their photos off of the iPad and onto a computer.  Super Impose and Snapseed are the final two apps in this folder and I can see great potential with both of them but my class will need a big buddy to help with these. 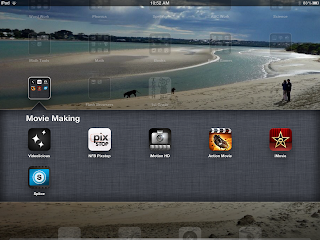 The movie making app includes Videolicious, NFB Pixstop, iMotion HD, Action Movies, iMovie, and Splice. While I made most of our class iMovies this year on my personal laptop I feel quite confident that next year we will be able to utilize all of these apps.  Here is a link to the Videolicious video they created. 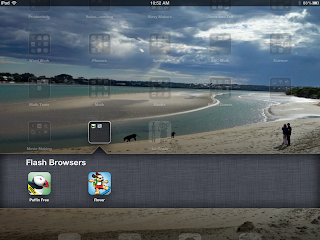 Flash browsers are great when you are trying to use a web based site that relies on Flash since the iPad does not work with Flash.  These two apps help you use those websites. I must admit though I was more likely to sign out and bring in the school's set of macBooks then fiddle around with these Flash Browsers. It is nice to know when the macBooks aren't available I have additional technology I can rely on.

Already just by sharing what's on my iPad I can see so many uses for the apps that I have, and for the apps that I don't have here.  I also know that I need to be mindful of what I have on the iPads as space is limited.  In addition as always I need to remember that technology should not be used for everything that I do in grade one.

It's exciting to know that I will have more than one iPad in my room next year and I can't wait to see what we are going to discover as a class.

What iPad apps do you use that you feel are "must have" apps?  I can already think of many myself but I'd love to have your input too.

*Additional information -  I realized that I forgot to talk about the apps I have on the bottom shelf of my class iPad.  You can read about them here if you're curious. Added Aug 4, 2012*
Posted by K Lirenman at 2:53 PM